Sometimes you just need to create a symbolic link. For this, you need to go through the command console under Windows, and that’s not really convenient… Here FeatherLinks (not to be confused with a NGO dedicated to the protection of penguins), which will allow to create symlink easily through a simple interface.

FeatherLinks is a licensed Creative Common Application 0 (CC0) created with Clickteam Fusion 2.5. You are free to copy, share, or modify.

V. 0.3 (October 6 2015)
• Empty areas were removed.
• Now, define the path and the target with keyboard is possible.
• The insight of the command prompt has modified, it’s no longer possible to change it with keyboard.
• Title is FeatherLinks.
V. 0.4 (October 7 2015)
• Background colour of path and target boxes change for show if directory exists.
• The file selector now opens on the path or already defined target.
• Enter key is no longer used to create symlink, a button has added for this.
• It’s no longer possible to expand the window needlessly.
V. 0.5 (October 13 2015)
• Interface has a little makeover and now is more lovely.
• I make an icon for FeatherLinks.
• Useless menu has gone.
• The application was divided into several sections, using a tab system.
• We can show/hide command prompt by clicking on +/- button.
V. 0.6 (October 25 2015)
• Now we can select the link type, Directory or File.
• We can click on “OK” button only if the path and the target exist.
• the window position is saved when we leave the application.
• ….
V. 0.7 (October 27 2015)
• Create a link to a file is working.
• Language system is working.
• The window is automatically positioned on the border of the screen if it is moved outwards.
• If we leave FeatherLinks with option panel opened, it will be in next time.
• Use FeatherLinks with the keyboard has been improved.
• ….
V. 0.8 (November 1` 2015)
• Change in colors.
• Add tooltips for all elements.
• FeatherLinks now checks if the link name is valid.
• Buttons and selectors name has been changed.
• ….
V. 0.9 (November 8 2015)
• Fixed saving settings.
• “OK” button tooltip did not display the correct errors, it’s fixed.
• “OK” button tooltip is now correctly update if is open.
• Tooltips no longer appears if an other application in front.
• Non-visible object tooltips no longer appears again.
• Path and target prompts no longer disappears when we cancel selection.
• Prompts no longer shown as valid if there is a space at the end.
• We can’t select again “no language” whith keyboard.
• Some bugs maked by bugs fix has been fixed.
• The link name is now indicated invalid if it includes special character.
• FeatherLinks is in english now.
V. 0.9.1 (October 3 2016)
• Drag and Drop to define the path and target is possible now.
• Tooltips relative to mouse has been changed. 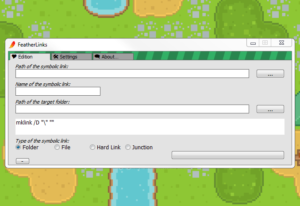 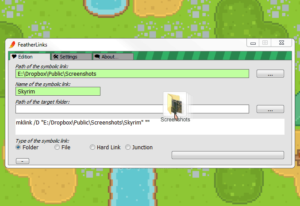 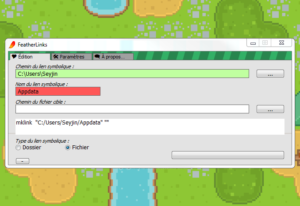 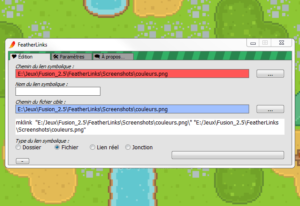 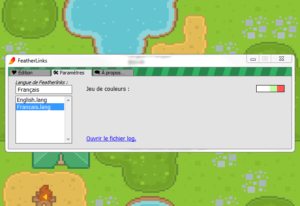 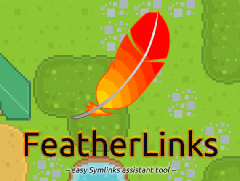